Peking University, Mar. 12, 2017: Beautiful, elegant, independent, responsible – All who have seen Sun Qixiang won’t begrudge these words of excessive praise. As the first female dean of School of Economics of Peking University in a century, she has not only boarded the highest podium of international insurance industry, but also, as an educated youth, gone to the countryside to experience the rural life during the Cultural Revolution. Just like the place, Hunan province, where she was born, brilliance and colorfulness are the key words of her life. 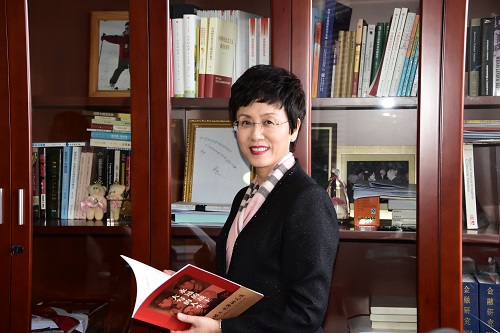 Poor, she made herself good; Successful, she made all the world good

In 1973, no sooner had Sun graduated from high school than she joined the tide of Down to the Countryside Movement. The next four years had witnessed her grown-up in independence, self-esteem and self-reliance. She says, “I have cursed that era, for it inflicts a lot of injustice and pain on us. But I also thank that era, for it teaches me self-reliance, self-esteem and self-improvement.”

In 1979, Sun attended Gaokao, China’s university admittance test. When it came to choosing major, Sun never thought of economics, because she knew nothing about it. However, the words of her father that under the background of opening-up and reform policy, talents specialized in economics must be in urgent need, changed her mind. Therefore, Sun started her journey in the study of economics. After working for three years with her master degree in economics, she continued her study in economic development strategy under the direction of Ph.D. tutor, Xiao Zhuoji, a prestigious economist from Peking University. In 1992, with the title of “The First Peking University Graduate Academic Top Ten”, she finished her Ph.D. study and stayed for teaching. In 1995, head-hunting companies wanted to hunt her away with 300 thousand Yuan after she came back from overseas. Sun had barely over 400 Yuan per month at that time. But she turned them all down and said, “The earth may not need me to rotate, but the purpose that I went abroad in the first place is to come back to build Peking University’s insurance discipline. I will not leave this job for individual interests.”

After more than 20 years of hard work, Sun has become one of the domestically recognized academic leaders in risk management and insurance.

The National 10th Five Year Plan of Insurance Industry, co-written by Sun and the directors of China Insurance Regulatory Commission (CIRC), has become an important document to guide the development of China's insurance industry from 2001 to 2005. Peking University’s China Insurance and Social Security Research Center (CCISSR) led by Sun, won the title of "Excellent Research Center of Peking University" for three consecutive years, and has become an important platform for domestic and foreign government, industry, academia and research exchange. The book Insurance written by Sun has won the titles of "Textbooks Recommended by the Ministry of Education”, “Beijing Top Textbooks”, etc. Thanks to her achievements and contributions in insurance discipline, Sun has received numerous high praises from domestic and international insurance circle. In June, 2016, Sun won John S. Bickley Founder’s Award, the highest prize in the international insurance industry, becoming the first Chinese scholar and female winner to win the award since its establishment in 1972.

My parents made me who I am

As a daughter, Sun appreciated her parents a lot.

Sun’s father Sun Ziming is like a lighthouse that never goes out. He continues to give out bright light and warms, accompanying Sun all the way.

Low-key is his first feature. In fact, he was an old soldier who participated in the war in 1938. When he was in good shape, he almost didn’t share a word with his children about the eventful years. Only when he was seriously ill did Sun know a thing or two about the war times from her father’s old friends.

Humility is his second feature. During the Cultural Revolution, her father served as party secretary in an iron factory in Yueyang. One day he came across a fellow from his hometown outside the factory. The fellow asked her father what he did in the iron factory. Her father asked him: "How do you think?" The fellow said: "the cook?" Then her father said: "You are right. Good observation!"

Loyalty is his third feature. After Sun’s mother passed away, her father remarried. Later when her stepmother was diagnosed with serious diabetes, her father, over 80 years old, insisted on taking care of his wife by himself and taking her to hospital for dialysis several times a week. Laundry and cooking were also on his shoulders, until his wife breathed her last.

Sun’s mother, though joined the army early and not quite educated, always knew the best. Her mother often told her not to talk behind one’s back or compare with others but just be herself. Sun kept her words in mind all the time and applied it to practical life. Her mother also told Sun that reading is beneficial. As a result, Sun always keeps the habit of reading. Sun thinks that reading makes one change from stupid to enlightened, vulgar to elegant, mediocre to wise and weak to strong.

“Be an honest person, do a serious job”. Her parents’ words have become Sun’s life principle.

Be an independent female, be stronger

On the wall of the hall in the building of School of Economics, commemorative photos of each dean are hung with Sun’s being the only female one . Sun is also the only female winner of John S. Bickley Founder’s Award announced by International Insurance Society for her excellent contribution in this area. Be honored with shining titles, she impresses the society with the perfect combination of femininity and academician.

“The value of female lies in their self-existence and self-fulfillment”, said Sun .
If it is asked what has contributed to today’s Sun, an independent and strong female, the answer has to date back to her early life experience. Under the special social background from the 1960s to the 1970s, namely the Cultural Revolution, Sun went through all hardship in farm work, was promoted when working as a telephone operator, and devoted to the academic research both as Ph.D. candidate and professor at Peking University after returning from the countryside. All those unforgettable experiences gave her the insight about “female’s value” and inspired her to pursue it. From her perspective, this topic derives from the restriction on female since hundred and thousand years ago and the fight done by those females in human history. It is widely discussed from female circumcision in Africa to Shakespeare’s masterpieces. For today’s China, it’s female’s self-confidence, self-esteem and independence that are the substantive fundamental elements of this country.

“If every female can develop the three qualities, the female aggregation will be indestructible.” Sun said at the 8th China Economic Women’s Development Forum in 2011.

Teaching talents is my fortune

Apart from the female, young students is Sun’s another focus. Being awarded as the PKU Top Ten Professors Beloved and Respected by Students is the greatest solace for her. Although offered high salaries by government and private companies through her teaching career, Sun insists that nothing can be compared with the feeling of achievements for her to watch so many young students accomplish their degree and serve in critical positions for China’s development.

Holding this belief in her mind, Sun always talks with her students no matter how busy she is. She urges them to make contributions instead of being selfish. Sun thus becomes “the spiritual mentor of many graduates”, according to one of her students lecturing at a reunion party, “Whenever I meet with difficulties after my graduation, I will go over my notebook and try to remember Professor Sun’s words”.

Sun said, “I hate making others disappointed. What my students said gives me a sense of fulfillment and happiness, but it also puts me under the pressure to do better so that I will not fail their trust on me. “